when we got married it was a snowy, snowy Thursday

and it was our snowy, snowy Thursday.﻿
It seems like we have grown up a lot in these three years. On the day of our anniversary my mom asked us if it felt like it was yesterday or if it felt like it was forever ago. We both voted for the latter. Not in the "Holy Moses! Life is a total DRAG!" sort of way, but in the "Wow, I've only lived with you for three years? I can't even remember what not being with you was like. Was I there?"

Jason wasn't feeling 100% so he let me choose where we went for our anniversary dinner. Because we had already been to the Taco Bus once that day I decided we could go somewhere that actually had padded chairs and waitresses. 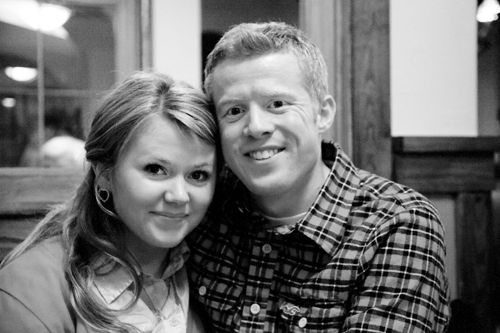 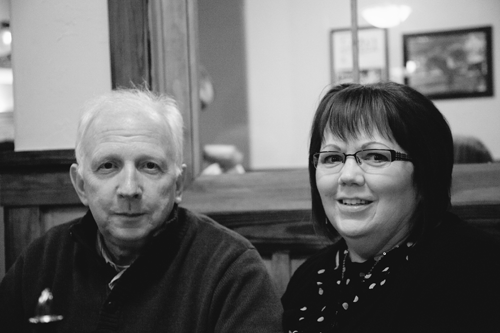 We invited my parents to dine with us on our anniversary because we really like them (actually they happen to be two of our very favorite people).

Because it was a nice little Italian restaurant I put on a silky shirt and a festive red cardigan and I made Jason change out of his t-shirt and into that dapper little thing you can see in that photo. My mom thought it was pretty funny that I made him put on a "wood-hauler" to get fancy. I guess by definition flannel plaid doesn't scream fancy pants. But in my defense he looks cute in a wood-hauler and I really like that one.

It turns out I like to be married to my best buddy ever. I like being married because I love the man I married on a snowy day three Decembers ago (especially when he wears his wood-hauler). It was probably the best choice I ever made.

Not to be a copy-cat, but Happy Anniversary!
Good choice on the flannel shirt. If Jason wasn't feeling all that great, at least he was comfy.

Awww... look at you two! Such a beautiful couple!

Oh, and I'm having a perfume giveaway if you're interested!

Happy Day to J&G. What a fun double date.

You two are the cutest! I wish we could actually have hung out together when you were here!

Happy anniversary!!! You look precious together. And I heartily chuckled inside at the wood-hauler thing. Boyfriend dresses like a lumberjack...almost everyday. I am in a daily battle to fight the lumberjack look. So when we go out, he has to take OFF his flannel. Not that he's not the cutest lumberjack I've ever seen. Cuz he kinda really is. But wood hauler is a new one for me. Happy end to 2010!!! Cheers!

oops. sorry i didn't wish ya a good one the day of. i honestly thought about ya. just not long enough to call ya! sure miss you guys!