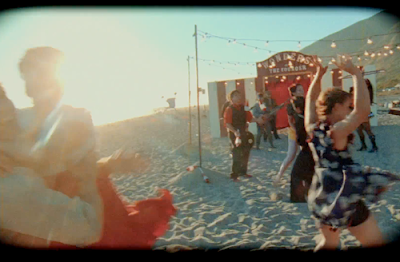 So I shared my latest fave song with you guys like a week ago.
(still love, still try to listen to it at least twice daily.)


Whenever I decide on a favorite song I almost always have a
favorite part of the favorite song—because we all know that
sometimes there are parts in songs that are extra awesome.


Well, Jason doesn't agree that my fave part of my fave song is
filled with extra awesomeness, in fact he thinks it's extra cheesy.
So every time I rewind that part (because the first time is never
enough to fully appreciate it) he says it's cheesy and I say it's not.


And naturally it has turned into an ongoing debate.
"I love it! LOVE!"  "Super cheesy, lamest part of the song!"


So I came up with a bright idea.

With it being election season and all (go vote! woo–hoo!) I thought
that it would only be proper to open up the polls on this one!


Take another listen to this song (I know you'll like it even better the
second time because I've been listening to it lots and lots) and pay
special attention around 0:55 where he says "my heart beats like a
drum" and the drums come in like a heartbeat and then you notice
the guitar and he keeps singing and it's total musical magic.


Be sure to have the volume up nice and high for the full effect.


Now cast your vote in the poll on the left side of the page!

Whoever loses has to make the other breakfast in bed.

Poll closes Friday at noon.
(and if you say it rocks you're allowed to vote as much as you want!)

I LOVE IT! IN YOUR FACE J-DAWG!

thanks steph. I knew you'd have my back!

I think that little ditty sorta rocks!! I'm totally with you on this one Ger... Sorry Jason!!

I really like the song and I do agree with you...that drum part is the best part. But, for some reason I'm not in love with the music video.

However, I voted for you Geri...Jason got my vote with the scholarship thing and you get my vote for this.

So, now it's all even steven.

thanks becky and thanks becca. preciate ya.

Geri, I voted that I love love it!
and Ty says hes sorry but you could have guessed which way he would vote (cheesy) but i cant figure out how to vote again.
Oh and Im pretty sure chewie loves that part so you can add another vote to the love it part too!

I voted love it. But if you're playing a little too much, I can understand Jason. (don't want him to feel oober out voted)

I hope you enjoy your breakfast in bed :-)

cheese is good.
i love cheese.

GERI!!!! That is my favorite part too!!!!! Seriously. I tell everyone haha. It must be our musical ears or somethin ;) Love you!
-Karli Shae

What song is it??

Rhythm of Love by the White T's.
Hopefully the player is working for you! If it's not it's easy to find on YouTube. :)

Love the song!! You know you love it to Jason!! Mom

I am a fan of his 'tenor' voice! Good song. Check out the new one from Joss Stone and Ricky Martin! Love it!!

I feel like this vote is a little biased! Or maybe a lot. I'm glad that Tyrel is with me though.

Jason,
You've got to get more of your man friends reading this blog soon or you are going to lose, big time. I'm just guessing that girls might like this song better than guys.

Not only is this a cool song but such a cute video too :-)