i was a telemarketer once 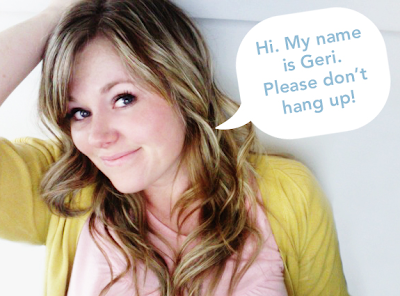 I signed up for a telethon fundraiser to earn money for SCCO.
(me and my stupid guilty conscience—signing up for service!)

After the lady with the tank-top/fanny-pack combo got done with her
whole spill (she even had a paper-easel-thing and she transformed what
was the anatomy lab into a room full of phones and smily faces taped
onto the wall. I thought that was endearing.) I sat there and looked at the
"script" we were supposed to speak from. Well it was around this time
the sweating started. (you remember my little issue with sweating, right?
I still gotta look into that a bit further.) I read through the whole thing.
I got up and got a handful of plain m&ms. And then I sat there and
stared at my white telephone and the doctor's name I couldn't pronounce.

Fanny-pack lady said that we should expect to get mostly answering
machines the entire night. I guess there isn't much speaking to the
actual doctors that happens during these nights of calling.

Not sure how long I went between the little card and the telephone,
but after some time had passed (and after I listened to the fellow
behind me dial in his first call and get his first answering machine.)
I popped two blue m&ms in my mouth and dialed in the digits.

"Oh! Hi. Uhhh. Hi. I'm Geri Egbert, I am a spouse of a first year
student at Souther California College of Optometry..." then I
asked for the doctor and then he said it was him and then I went
stammering on... "Oh! Oh. Ok. Great, good, Um, I guess I wasn't
expecting someone to answer. Um. Actually, I'm calling to—I'm
sorry, I'm just really really really nervous!"

And then the guy donated 500 big ones!

And my fingers ached from the death grip I had on the phone.

The rest of the night wasn't as successful for me. (but I did get the
most contacts with actual doctors in the whole group. so I'm not
saying that I don't rock.) There were, indeed lots and lots of
answering machines, not homes, wrong numbers and even one
hang up! (I tried really hard not to take that one personal.)

All I gots to say is that I'm pretty much an awesome telemarketer.

Too bad I don't see a career of it in my future.
(nope not doing that again. I only have to learn lessons once
thank you very much. well, except for that whole procrastination
thing—I keep having to learn that one over and over.)

p.s. tell all your friends to vote for Jason!

haha! yikes. i was a debt collector once.
for four months.
definitely the most interesting job i've ever had...

oh no! now that would be so scary. even worse.

Did you stink when you got done? Is is just sweat or sweat and stink?

just sweat—i wear my DO (don't you worry, sista!)

I don't think I've ever heard a telemarketer stammer. I think that's what turns me off...they don't give me a chance to reply to anything until they've gone through the first 5 whole minute spill. So, stammer on!

Hahahaha. Jeff and I just got a good laugh out of reading your story, out loud. I think our favorite part was the whole "tank top/fanny pack combo lady with paper eisel and smile faces on the wall..." or something like that, haha!!! You made our day. :) Thanks for the good laugh. And sorry you got suckered into it. We both learned our lessons well at Melaleuca. Waita go on the 500 big ones!!!!