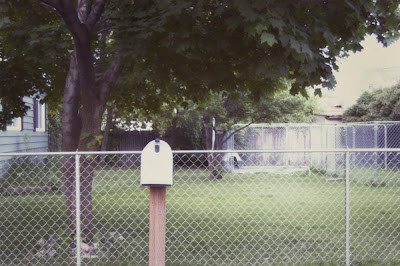 at d.i.
(so it certainly didn't break the bank.)

i had myself talked out of it (pretty much—ok. i was still wishy-washy.)
and then i talked to my mom.

in response she simply stated:
"you had me at lime green."

so i'll be picking it up tomorrow.
(not real sure how exactly. but i think i'll find a way.)

and then i'll be showing some photos.
(it's great. it's kind of 60's-ish.... ok. so i'm not really positive
on the decade. BUT it's totally old school and i think it rocks.)

i've had my eye out for some sort of funky chair/sofa/sitting
device for quite a while now for photo shoots.  and i'm
thinking that this little gem will be dandy!

side note: jason and i took a walk tonight. down a charming little
side street that gets forgotten (but it's way cute—see the photo
above).  and as we got to the end of the little street we came upon
what we believe was a total drug bust.  there were cops and cop cars
and cop vans and a cop giving a guy a breathalyzer test (that's what
it's called, right?) and a few other peeps standing around... maybe they
were next in line for the breath test. i dunno. (i was gonna snap a
picture of that but i wasn't sure how legal that would be.)

p.s. tomorrow i will be sharing other various finds from my d.i.
excursion as well. i'm sure you'll be impressed by my thriftiness.

hey, sounds cooleo.
I know that school is a stressful time in your life, but I'm thinking that someday you two will truly look back at this time as one of your favorites! (walks, bike rides, DI, etc.)

coop wants to have you take his picture of your new john deere couch ... that means green.
wyatt does not like your kissing picture. it's super gross. hyrum wants you to come see his kitties. annie and maggie just love you both to pieces!!

signed in with the wrong blog --- i am a retard running on not much sleep!! love me anyway would ya.

Our piano teacher has a lime green love-seat. Everyone always loves it. I can't wait to see yours.

I'm lime green with envy. I just got back from a second hand store here. It was a little bit (or a lot) P.U. Stinky. I am looking for stuff for missionary apartments and haven't had much luck. I totally miss DI and can't wait to see your find. If you ever get in the mood for an orange love seat/ sleeper, Becca might make you a deal on one. It has been in our basement for 5 or 6 years.

ahh, thanks auntie el. i actually just got back from picking up the little darling. but i'm thinking that i'll keep the thought of your pickup in mind for future adventures.

ooo! it sounds amazing! i can't wait to see it.