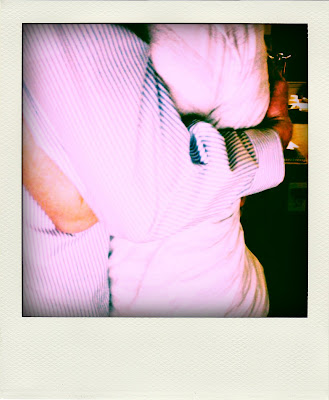 it's been quite a busy week up in here!
jason's had some wicked tests and i've been runnin around like a chicken-with-it's-head-cut-off  (anyone else grow up saying that one?) with projects, appointments, photo shoots, you get the idea.
SO naturally i decided that it would be a good idea to take a bubble bath the other day.
to "take a load off" and relax while soaking.

i remembered that i had this fantastic smelling bubble bath/shower gel set that my friend gave me as a bridal shower present.
i went to the drawer where i keep extras of random bathroomie things.
i pulled out the bottle and gave it a look over.
it was then i realized something was a bit wrong.
this full bottle of bubble bath i was holding in my hand was not bubble bath.
it was shower gel.
i ripped open the shower curtain and grabbed for nearly empty bottle in the shower.

sure enough.
i've been washing myself with bubble bath for the past year.

no wonder there were suds flying all over my head when ever i lathered it up.

p.s. we had went out for some Mexican food last night after my shoot and i haven't been the same since. something a little bit bad happened i think.

p.p.s. i am sort of addicted to photography right now and i think i like it that way. take a looksie of the last shoot.

hey, i always say that saying and my roommates just look at me like I'm a bit wierd. Thats awesome that you have been using bubble bath. I once made a similar mistake. I thought something was lotion , but as I was putting on the creamy mixture it wouldn't rub in and sure enough it was shower gel. :)

Those bathromm making places should only make soap and lotion. What is all that other stuff for?
I'm headed to look at your pictures.

I love all of you pictures... you are so talented!! I can't wait for the snow and muck to go away so we can have a turn!!