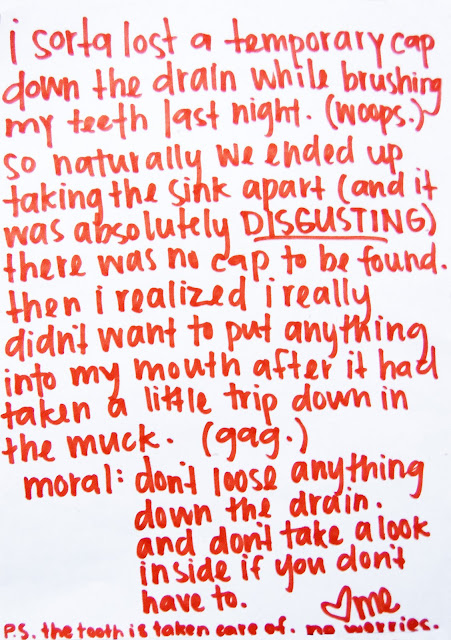 HAHAHAHA...at first I thought you meant like the cap off the toothpaste cuz Jake almost does that all the time...I can't believe it was actually off your tooth! That's hilarious! I'm glad your tooth is taken care of though.

That is literally "money down the drain"!!!!!!! Caps aren't cheap! Glad to hear that you got it all taken care of.

Caps can be such a pain, but I guess they are better than dentures. I agree about sink pipes and they are probably better that a lot of the other pipes found in a bathroom. GAG! I don't know how anyone can be a plumber.

please join the exchange. just post a recipe or e-mail me one. Thanks Geri! Did you make that recipe? I love it. Hope you did too.

We had to take the water fountain off the wall at the bazaar, and there is actual sludge in the pvc pipe down there. And it is black. Yikes.
p.s. (We had a plastic cup taped over the fountain, since it would spray all over the merchandise when someone would try to get a drink from it. Then someone actually broke the fountain part off trying to get the plastic cup off. They must have been very thirsty.....Anyway, just explaining why we removed the drinking fountain)