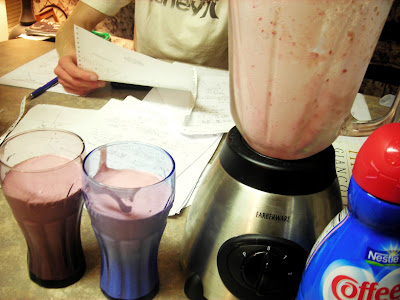 (no, we haven't developed a liking to coffee. we just like creamer in shakes & smoothies. Tang Smoothies are the bestest!!)
this summer I went to my sweet little Grandma's raspberry patch and picked a big, beautiful bushel of berries. we had berries in our sink-berries in our fridge-berries in our freezer-berries in our cereal-we had berries comin out of our ears!
so I did the only thing I knew I could do with the plentiful bushel of berries to preserve them and eat them at the same time.
I made jam. lots and lots and lots and lots and lots and lots (you get the picture) of jam.
two weeks ago Jason called me while I was working at Mini.
he said there was a cute little boy who knocked on our door with his grandpa.
he was selling the berries they had freshly picked out of their raspberry patch earlier that morning. (scam?) Jason Softy Richard Egbert got out his wallet.
[this reminded me of the time the socially-awkward nervous blonde guy came to our door selling Starving Student discount cards. (you know, those ones with all the places/deals listed down the accordion-folded card in microprint. yeah. those ones.) the encounter began with Jason telling the lanky dude with glasses that we wouldn't buy one because we would never remember to use it...... and ended with Jason trying to talk me/himself into buying not only 1 Starving Student discount card but 2 (one for each of us). I just shook my head. he started out like a tough guy-straight talker, then folded like a real softy.]

I must admit, a cute little boy with his grandpa selling raspberries would be pretty touching and probably tip any old grump off the edge...... but in my mind we just finished with the whole berry game. I am not heartless, I would have surely done the very same thing. (especially with the nice grandpa chiming in "tell him we picked these just this morning." then the little, wide eyed dude piping up, "we picked these just this morning! really fresh!

once I got home that evening I put the berries in a bowl of water and rinsed them off a bit. after they were clean we both tried a berry. (these were not your average raspberries. they were larger and sweeter than any raspberry I've ever had.) we ended up finishing off half the bowl of berries and had barley enough for a delicious raspberry shake.
moral to the story tonight is:
being a softy isn't all that bad.
in fact, it pays off with tasty study-shakes & sweet discounts at places such as the new movie theater and Dominos (mmmmm tasty...... or is that Quiznos?? either one. we've got discounts for both.)
but if I hear that any of you have stopped by our door trying to sell something you will have to answer to me! (that's right. Jason's fired from answering doors to salespeople. even saleskids.)

The berries could really have been fresh. Rex and Jen have some that bear twice a year and they have been picking them recently. I wish somebody would come by here selling fresh raspberries.

door to door is pretty tough to handle. How about just not getting it? Is that rude?

i don't think that's rude! i just don't answer my door ALL the time!! it's hard to say no!! i totally feel Jason's pain!! i do tend to be sucker sometimes though!